The official website for the television anime of Asari Endō's Mahō Shōjo Ikusei Keikaku (Magical Girl Raising Project) "survival action" light novel series began streaming a new promotional video on Wednesday. The video shows protagonist Snow White playing the titular social game and winning magical candy in a battle, before it announces that she has been chosen to be a real magical girl. It previews the anime's opening theme "Sakebe" (Shout) by Manami Numakura (Note: The YouTube video on the site is region-locked for the United States).

The anime will premiere on the AT-X channel on October 1 at 24:00 (effectively, October 2 at midnight), before also running on Tokyo MX, BS11, and the GyaO! streaming service in Japan. 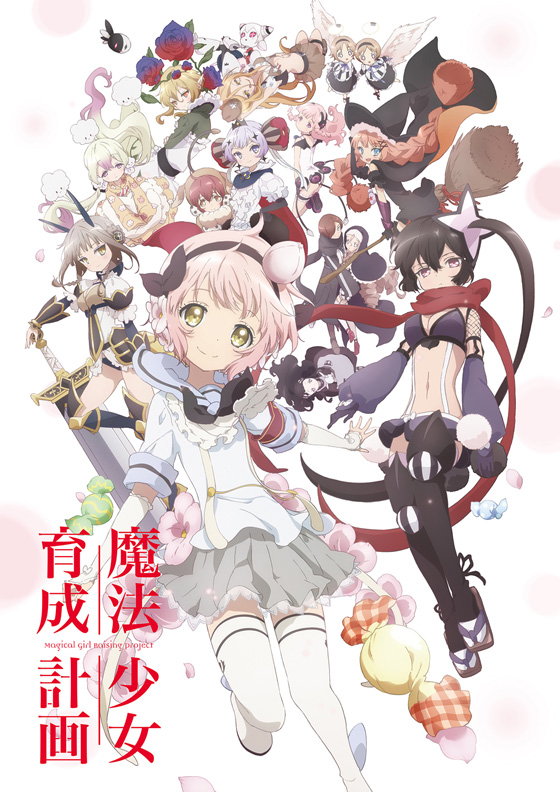 Hiroyuki Hashimoto (Is the order a rabbit?) is directing the anime at Lerche, with Takao Yoshioka (Elfen Lied, High School DxD, Your Lie in April) supervising and writing the scripts. Yukiko Aikei (Horizon in the Middle of Nowhere, Accel World, Your Lie in April) is designing the characters for animation.

Endō's novels are set in a world where a social game called The Magical Girl Raising Project allows one in tens of thousands of people to be a "magical girl" — possessing extraordinary physical capabilities and looks, as well as special magical powers that set them apart from the rest of the human race. But one day, in a district containing 16 magical girls, the administration announces that it must halve the number of magical girls to solve the problem of magical energy. At first, the 16 magical girls race to collect more "magical candy" than their competitors, but the rules quickly become twisted, and it quickly becomes a murderous battle for survival among them.

Takarajimasha published the first volume of the light novel series with art by Maruino in June 2012. It published the 10th volume, titled Mahō Shōjo Ikusei Keikaku episodes φ, on April 9.

Thanks to Dennis R for the embedded video

Nov 29, 18:51
7 comments
anime
Miyamoto announced brief hiatus earlier this month due to poor health ― The official Twitter account for the Mobile Suit Gundam: The Witch From Mercury anime announced on Tuesday that voice actress Haruka Shiraishi will replace Yume Miyamoto in the role of Nika Nanaura in the show. Shiraishi will debut in the role in the show's 10th episode on December 11. Miyamoto's talent agency announced on Novemb...
news
3 comments

Nov 29, 12:00 anime
There's one thing that prevents Scarlet Bond from becoming a genuinely memorable entry in the Reincarnated as a Slime franchise: Rimuru Tempest himself. ― That Time I Got Reincarnated as a Slime: Scarlet Bond is somewhat of a rarity in original tie-in films to TV anime that are adapted from another medium. Most films in this vein are either not in continuity or are so removed from the main story that...
column
4 comments