Many typical Anime character designs feature heads that are just somewhat larger than would be proprotionally correct. Super-deformed characters, SD for short (also called "Big Head", SD Mode, CB or Chibi Body or Chibis for the plural) exagerate this deformation in the goal of appearing cute and funny.

Artists often Super Deform characters in order to show an extreme change in the characters' mood. While the characters' mood may change to anything, seriousness, anger, embarassment, feigned cuteness, the goal of the animators is always comedic cuteness. Often done at the punchline of a joke for an extra comedic oomph.

In most Anime the SD-Mode only lasts a few seconds, however there are a fair number of Anime where the character designs are completely SD, very often in childrens' shows, and in parodies such as Scramble Wars. 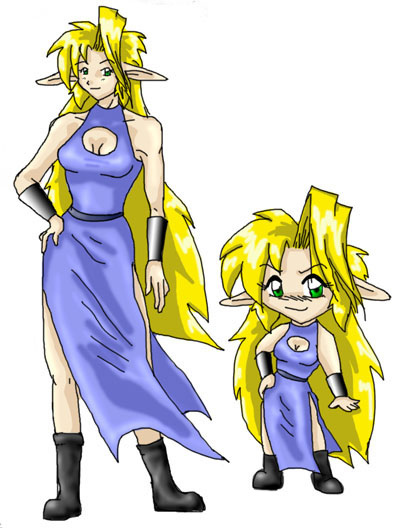 Aug 17, 13:13 merch
Win a copy of this beautiful Mamoru Hosoda artbook! (Extra chance to win available to ANN Subscribers) ― Mamoru Hosoda, animator, director, and writer, is known for his works such as Belle (2021), Mirai (2018), Wolf Children 2012), and The Girl Who Leapt Through Time (2006). The Man Who Leapt Through Film: The Art of Mamoru Hosoda contains 350 full-color illustrations. Written by renowned animation c...
feature
6 comments

Aug 17, 13:00
6 comments
anime
What do Hunter x Hunter and Dragon Ball Z have in common? Heroes who are easy to cheer for, but also very extreme in their selfish pursuits. ― SPOILER WARNING: The following article contains major spoilers for the 2011 Hunter × Hunter anime It probably wouldn't be a stretch to say the most iconic face of the shounen manga battle genre would be Son Goku from Dragon Ball. Goku works to be the strongest...
review

Aug 16, 19:56 games
Every page is a new adventure, dripping with love and care from a child who is just bursting at the seams with how much he wants to share with his friends. ― I realize I might be a bit too biased to properly review RPG Time, the new RPG from studio DeskWorks and Aniplex. It's not because it's steeped in JRPG lore or because so much of its iconography brings Dragon Quest to mind—rather, I see way too ...
interest
9 comments

Aug 16, 19:16
9 comments
people
She vowed to continue working as a voice actress and single mother ― Voice actress Mariya Ise (JoJo's Bizarre Adventure: Stone Ocean, Hunter x Hunter) announced on Twitter on Friday that she has divorced and is currently raising her child as a single mother. She decided to announce this because her child recently entered elementary school, and thus her opportunities for socializing outside of a work ...
news
8 comments

Aug 16, 19:14
8 comments
people
Shizaki also plays BanG Dream!'s Rinko Shirokane ― The official website for Bushiroad's D4DJ project announced on Monday that voice actress Kanon Shizaki is stepping down from her role as the character Rei Togetsu in the franchise. The announcement did not announce the reason for Shizaki stepping down from the role, but Shizaki added in a statement on her Twitter account on the same day that continui...
daily briefs
6 comments

Aug 16, 19:13
3 comments
people
Murase passed away on August 12 due to long illness, kidney failure ― Artist Sho Murase passed away on August 12. She had been fighting a long illness and health complications, which included kidney failure. Murase was born in Japan, then moved to Spain at the age of one. She studied fine art and graphic design there, before moving again to San Francisco. She has worked on numerous art pieces, includ...
ranking
6 comments

Aug 16, 12:45
6 comments
anime
The user rankings of the Summer 2022 season are finally starting up. Amid the expected heavy hitters, Call of the Night and Lycoris Recoil carve out a place. ― Let's have a look at what ANN readers consider the best (and worst) of the season, based on the polls you can find in our Daily Streaming Reviews and on the Your Score page with the latest simulcasts. Keep in mind that these rankings are base...
game review
7 comments

Aug 16, 12:00
7 comments
games
I honestly feel a bit conflicted after playing Digimon Survive, because I truly admire the amount of passion and thought put into it. If you are a long-time Digimon fan, then this this is worth at least one playthrough. ― Last month, I had the honor of interviewing the producer of Digimon Survive, Habu Kazumasa, who expressed his desire to take Digimon in a darker direction and demonstrate his person...
column
6 comments