This Week in Games
The Game Awards 2020 Roundup

Heya folks! I'm here with a special weekend edition of This Week in Games, covering the yearly WORLD PREMIERE trailer showcase/hot mess that is The Game Awards! It's been a strange year for gaming and the world at large. Perhaps The Game Awards would transform its overproduced, celebrity-focused presentation into something that actually honors the people that make this industry awesome!

SPOILER: It did not. But there was still plenty to discuss anyway, and that's what we're going to do!

I'm not going to cover everything that was announced or shown at The Game Awards – that would be an agonizingly long column that would be as hard to sit through as the VGAs themselves. Instead, I'll be focusing on what I found memorable and what caught my attention for good or bad reasons. You are, of course, quite welcome to discuss everything and anything from the VGAs in the forum, even if I don't mention it here!

OVERALL IMPRESSIONS OF THE VGAS

For starters, why is this show three hours long? I was desperately wanting to check out around the 1:30 mark, but it just. Kept. GOING. Maybe we need to mandate a trailer length, because some of the reveals went on for what seemed like an eternity. (Looking at you, Crimson Desert.)

But besides the dull, painfully pandering and corporate nature of the presentation, my biggest problem is that every time it feels like The Game Awards is making some progress in recognizing the worth of games besides the most high-budget, high-profile AAA title, it immediately walks that back. We saw a lot of cool, unusual stuff get recognized with nominations this year, as well as important new categories like “Innovations in Accessibility”… and they just handed all of the awards over to The Last of Us Part 2 anyway, because that's what's expected.

The Innersloth development team's emotional reactions to Among Us winning Best Multiplayer Game was perhaps the only truly real moment of the whole thing. This tiny team made a thing that helped a lot of folks during tough times, and they're overwhelmed by the support of industry and fans! I mean, yeah, the game technically didn't release in 2020, but seeing how much recognition means to them, I'm okay with letting that slide.

In summary: The VGAs are still pretty bad, and I feel somewhat cheated for getting my hopes up that they'll improve. But I'll still watch them next year out of sheer obligation.

Also, we now have a soundbite of Ralph Macchio saying “Under Night In-Birth,” so I guess that's something.

TRAILERS AND ANNOUNCEMENTS OF NOTE

One of the first trailers shown was for NieR:Replicant ver.42069, focusing almost entirely on silky-smooth 60 FPS gameplay. I did not realize how much I wanted a smooth, 60FPS NieR re-experience until now. Gonna be there day one next April!

After a few other trailers (I was onboard with Century until I realized it was a multiplayer-only game and not a Panzer Dragoon-style rail shooter) and a performance of Persona music, we got our promised, much-anticipated Smash Ultimate character reveal. Remember December 9th, 2020, because in 30 years our grandchildren will ask us “Where were you when Sephiroth impaled Mario?”

I know a lot of folks are hype for this, and it makes sense – FFVII Remake is out, and Squeenix wants to push it. But Final Fantasy is a huge, storied series with a lot of characters folks love. If we're going to double up on Final Fantasy rep, can we at least get another game besides FFVII in there?

Anyway, if we have to have Sephiroth, we can at least hope that his Final Smash involves making everyone watch the entirely of the three-minute Supernova animation from FFVII before sending them all blasting out of the arena. Also, maybe this will get us a bigger selection of Final Fantasy music in-game. Here's hoping!

Bad news: Rare isn't doing the development. Well, okay, given post-Microsoft Rare's track record, maybe that's not too bad. The developers are The Initiative, a Microsoft-funded Santa Monica studio whose purpose is to make “AAAA Games.” Knowing how miserable it is to make AAA games, the concept of going beyond that makes me die inside. Well, I hope it's just marketing-speak and these folks won't be crunched to hell and back to make Perfect Dark into an overlong, feature-bloated disappointment. But I'll be real: I think that's exactly what's going to happen.

Next, we have Back 4 Blood, which looks a little something… like this!

Looks like a solid co-op FPS that it very obviously a spiritual successor to a similar, well-known and well-loved game. Props to the Turtle Rock team for that title, which is up there with The Evil Within in the “let's very directly reference the thing this is heavily inspired by without treading on trademark issues” department.

There were a handful of indie game announcements at the VGAs, but the one that stuck out to me the most was Season, a chill exploration game about anthropology and recording the history of dying cultures. I like environmental storytelling a lot, so I'm definitely quite interested in checking this out.

Meanwhile, here's your reminder that Dragon Age 4 still exists in some form. Gameplay? Why do we need to show that?

We can't have a VGAs without a trailer showing a digital version of a famous persona, so here's Vin Diesel in the game adaptation of The Croods 3: Uncanny Valley.

Oh, sorry, yeah, it's Ark Survival Evolved 2. Ark is one of those games that is extremely popular, yet so far out of my wheelhouse that I know only the barest of details about it, such that “it exists.”

Scarlet Nexus appears to be progressing quite well! The release is date is still up in the air (Summer 2021), but I'm okay with delays if the team at Bandai-Namco polishes it up nicely. The action looks smooth and fun, and I'm a big fan of the unnerving enemy designs.

CAPCOM had a few retro announcements, starting with a Ghosts and Goblins remake. It looks… bad! Like, really bad!

I've heard a few folks say “well, maybe it looks bad on purpose to mimic medieval art!” To which I say, “okay, when did medieval art animate like weird gangly QWOP models?”

If any of you remember the old Microsoft Game Room back on the Xbox 360, this is similar. You have a little virtual arcade you can play games in, which you purchase as add-on packs.The games are basically divided by era: pack 1 is 80s stuff, pack 2 is early-mid 90s, while pack 3 covers the late 90s into the early aughts. There's stuff in here that hasn't ever seen a home port before (besides on that hilariously terrible plug and play joystick disaster), most notably Progear and 19XX, two favorites among shooter fans. Also, the arcade cabinets are modeled after several cabinets CAPCOM produced in Japan and Asia over the years, which makes me happy. I love the Mini Cute forever.

That's not all from CAPCOM, though, as there's also Monster Hunter Rise! Besides showing off more of the village and new monsters, we also got a release date: March 26th! A free demo will be available in January, as well, so those of you who still don't know if Monster Hunter is your thing will be able to give that a test drive. Monster Hunter Stories 2 has also been dated for Summer 2021, and you'll earn bonuses in both games if you've got your save data on the same console.

Oh hey,Evil Dead: The Game is a thing that exists! It's not the first attempt to make a game out of the beloved film: attempts go as far back as 1984 on the C64 and ZX Spectrum. This certainly looks to be the most high-budget and high-profile attempt, though! The developer is Saber Interactive, whose history is… checkered. I'd cautiously temper my expectations for this one, especially if you're a fan.

Good news for Xbox and PC players: You'll soon have all of the Yakuza series available on your platform of choice! The Yakuza Remastered Collection and Yakuza 6 are all coming to PCs and Xbox systems, so you now have the full Kiryu Saga to play and enjoy. Don't ask about Dead Souls, we don't talk about that one. 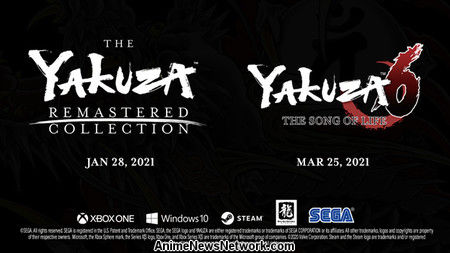 So, do you all want to know what got the biggest laugh out of me at the VGAs? This next trailer.

Just… wow, holy shit. After the mess of Andromeda, the scathing reports on BioWare's crunch-laden work environment, everything Anthem, and high-profile staff departures just the week before, y'all just do a teaser saying, “yeah uh, we still want to do Mass Effect!” and expect people to lap it up? I'm not sure if it's audacious or pathetic. Possibly both! Either way, it left me absolutely dying.

I think that about wraps it up for trailers and announcements I found particularly memorable. There were others I didn't touch on here – perhaps I didn't bring up something you got really hyped for? I'd love to hear about what you enjoyed (or didn't enjoy) from this year's VGAs, so come and laugh at how bad Reggie Fils-Aime's webcam setup is in the forums with your fellow ANN readers (and me). I'll see you again with a regular TWIG next Thursday. Until then, stay safe and play games!

This Week in Games homepage / archives

Jan 21, 15:00
1 comment
manga
Ruby and Steph both attend an elite boarding school for girls somewhere in Europe. Ruby, younger by a year, has no real reason to interact with Steph until the two of them are the only girls to stay at the school over Christmas break... ― Of all of the manga you would expect to find a bibliography of works consulted for, Asumiko Nakamura's Class S yuri series A White Rose in Bloom is probably not hig...